Darjeeling, Queen of The Hills, is a small, picturesque Himalayan town located at an altitude of about 6710 feet and is one of the most coveted travel destinations in India. Darjeeling has a rich cultural heritage and a history worthy of being proud of for every traveler visiting the town's splendor. After East India Co. acquired Darjeeling in 1835, the city's face started to come in shape as we know it today. 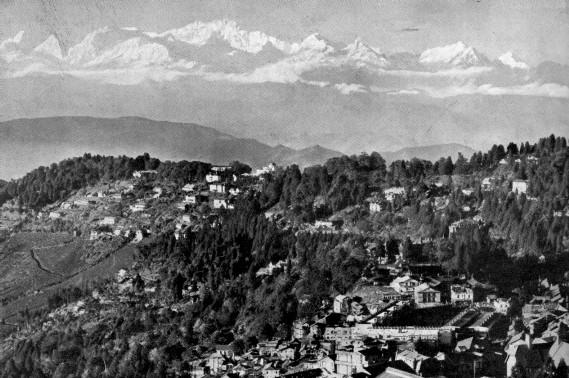 The name ‘Darjeeling’ has been derived from a monastery called ‘Dorje Ling,’’dorje’ meaning thunderbolt (originally the scepter of Indra) and ‘ling’ a place or land, hence ‘the land of the thunderbolt’ built by Denzongpa tribals in 1765, on behalf of the Chogyal or King of Sikkim. It was a part of the kingdom of Sikkim, and a native tribe named ‘Lepcha’ were the original inhabitants of the place. The differences between the British and Sikkim led to the annexation of Darjeeling into the British Empire. The district grew as a popular tourist destination and became known as the ‘Queen of the Hills.’ After independence, in 1947, Darjeeling was merged with West Bengal.

The British had a significant impact in building Darjeeling into what it is now. A socio-economic hub in the Himalayan regions. Darjeeling became the first town in India to receive electricity back in 1987. The first hydropower station in India, and reportedly in Asia too, had emerged in Sidrapong, near the town of Darjeeling. 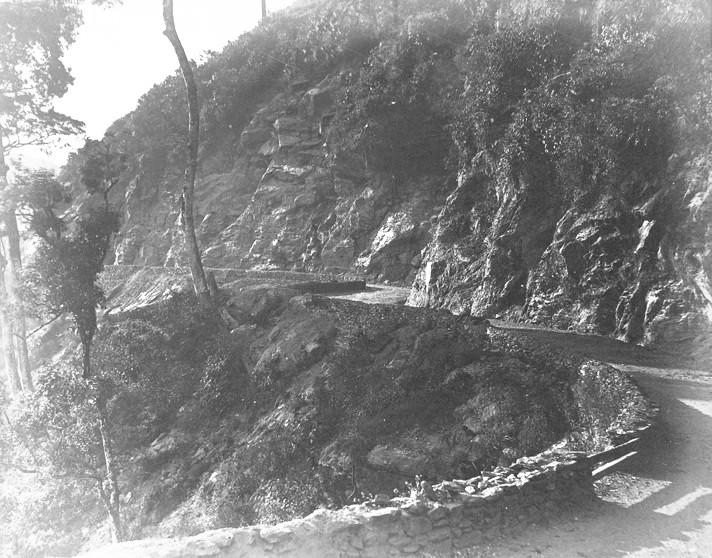 The roads were just mountain trails back in the day. The Pankhabari Road from Siliguri to Kurseong and the Old Military Road over the top from Kurseong to Ghum could only be used by porters or packers horses, making transportation of goods very difficult. Hence, the Hill Cart Road from Siliguri to Darjeeling via Tindharia and Kurseong was built 1862 – 1869 with an easier gradient for two bullocks to pull a cart. This new road drew more and more people to Darjeeling, and soon the new bullock carts could not keep up with the demand for transportation. 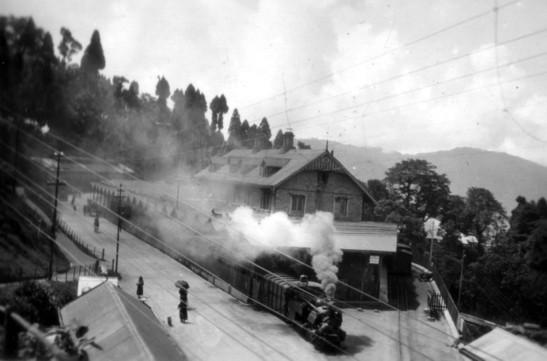 The increase in demand for transportation led to the ingenious idea of establishing a railway system for the mountains. As regular railway tracks were not feasible in the narrow slopes of Darjeeling, the Britishers established a narrow-gauge system. They started running the revered world heritage Darjeeling Himalayan Railway also known in common lingo as "The Toy Train." 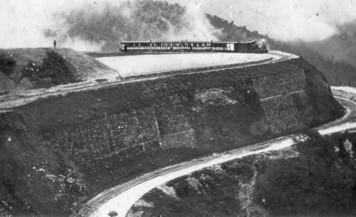 To traverse the treacherous slopes, they employed the help of Zigzags or z-reverse and loops. Some have transformed into famous tourist spots, such as the Batasia Loop and the lesser-known Smritiban Loop in Tindharia. 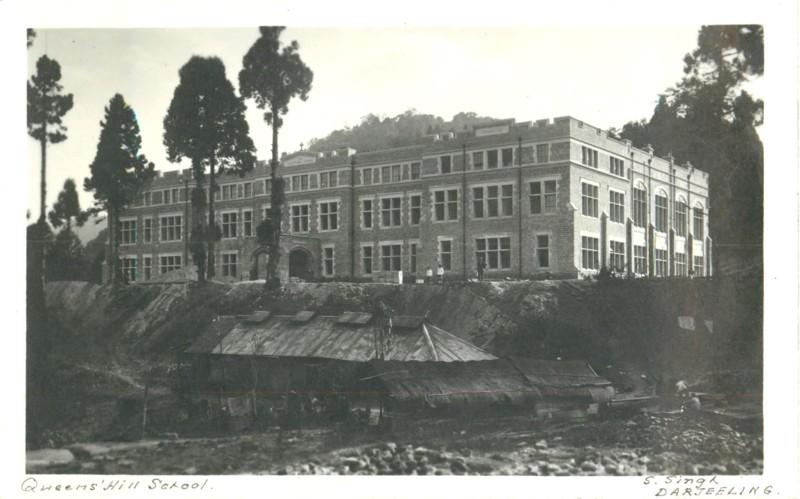 The second need of the hour was quality education in the Darjeeling area for the wards of several dignitaries who had by then settled in and around Darjeeling as it became increasingly popular with the foreign dignitaries. They established several schools and colleges in this regard. Most popular among them are St. Joseph’s School in Darjeeling, Goethals Memorial School, Dowhill & Victoria Schools in Kurseong. These schools have lasted the test of time and are still the epitome of the education system in Darjeeling and its areas. Owing to its rich cultural heritage and

the historical significance, these schools have one of the most coveted seats in the region. 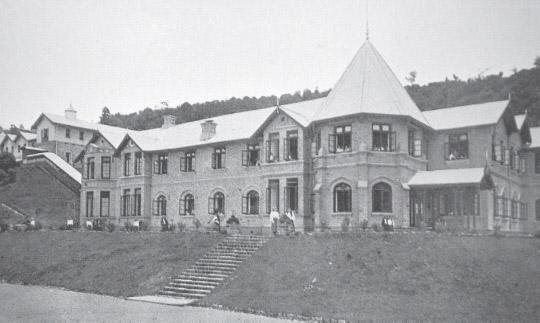 You can spot several other architectural wonders in and around the town, which have a flair of the mid-1800s to early 1900s to them. Buildings such as the Darjeeling town hall (Capitol Hall) and clock tower have been declared heritage sites and houses the Darjeeling Municipal Corporation. The clock tower resembles ‘The Big Ben’ and is visible from several places in town. It is truly a sight to behold. 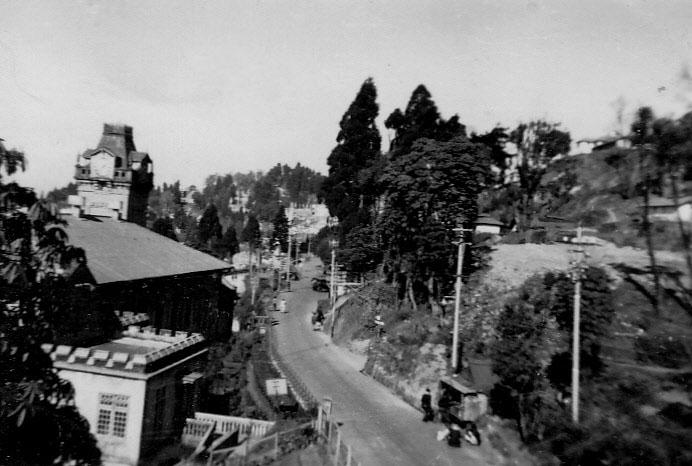 Capitol hall and the Clock Tower. 1950

Various churches built back then still function to this day. St. Andrew’s Church, St. Luke Garrison Church, and MacFarlane Memorial Church are some of the oldest churches in the region. They are roughly 125 years old and have seen the area go through various geopolitical changes while remaining a pillar of stability throughout the ages.

The Chowrasta is one popular destination for all when visiting Darjeeling. Consider it the equivalent of “The Times Square.” Chowrasta has always been the hub of everything in Darjeeling. From social gatherings to souvenir shopping. From a calm evening stroll to cultural events. Chowrasta has stood the test of time. It is located just below observatory hill and is a must-visit when in Darjeeling. 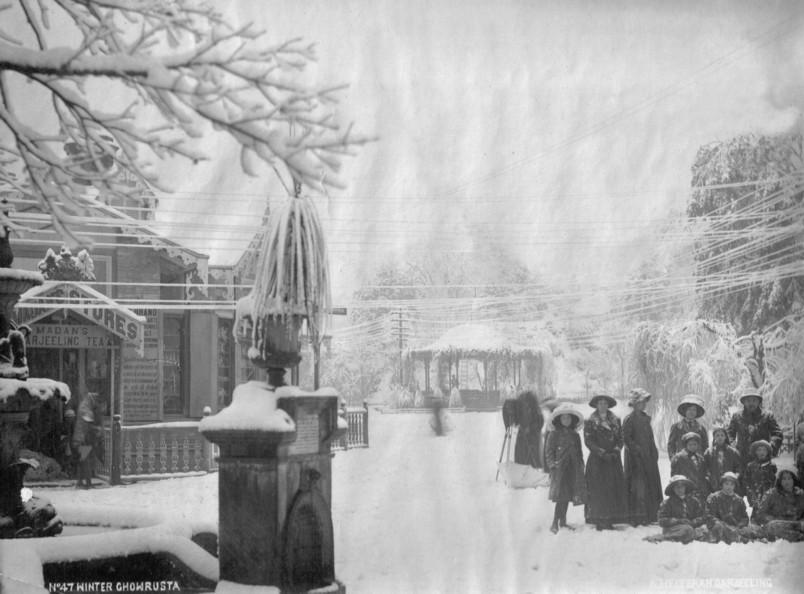 Chowrasta under a thick blanket of snow. 1905. 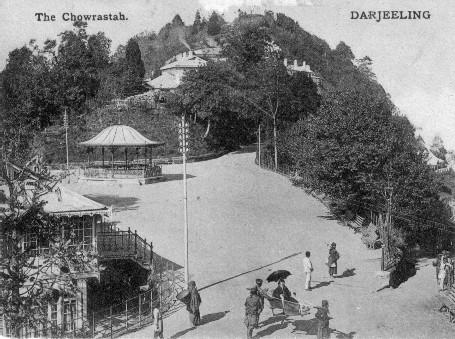 Observatory Hill is one of the most underrated yet significant points in Darjeeling. The hill, which was later named observatory hill, was home to a religious Buddhist shrine. Being the highest point in all of Darjeeling, it occasionally received lightning, hence the name; “Dorje,” which implies Thunderbolt in Tibetian. Home to Dorjeling Monastery, once upon a time, it now houses a Hindu Temple called “Mahakal Temple.” Being a primarily Hindu religious site, it might be the only place in this country where two religions coexist so naturally. The temple is full of Tibetian Buddhist architecture and covered in Tibetian Prayer flags. You will find priests and monks chanting in such harmony that to the unknown, both seem to be praying to the same deities. Observatory hill also provides a splendid panoramic vista all around it, and You can view even Sikkim from this point. The hill has seen everything change around it but has stood firm and tall, spreading peace and prosperity through the fluttering prayer flags with each breeze. 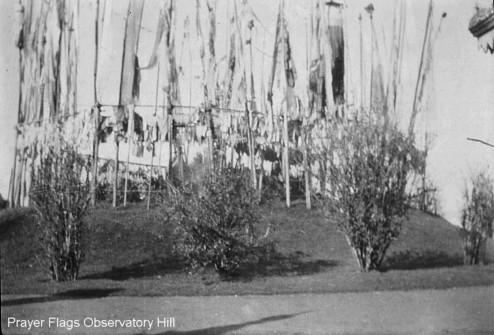 Another significant British impact in Darjeeling was the tea plantations. The myriad of rolling hills covered in tea leaves and shrubs is a peaceful sight. Tea is the primary export of Darjeeling and has been for quite some time. One of the priciest, Darjeeling tea has made a name for itself worldwide. Owing to the perfect climate in Darjeeling and the hard-working folk who have been carrying out this tradition for over acentury. 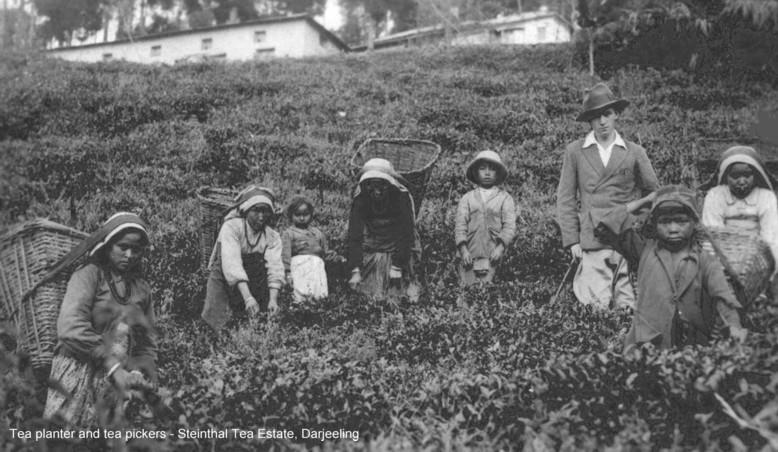 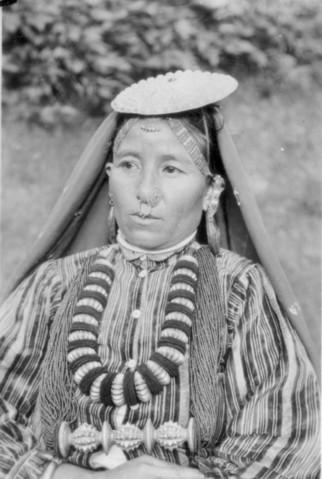 Above all, Darjeeling is considered Queen of The Hills, not just due to the views and the tourist spots. It is not because Darjeeling Tea is one of the most coveted Teas in the entire world. It is the people of Darjeeling. They have and will always have the 'Darjeelingey' spirit in them. A helping hand. A courteous host. A warm welcome. Things in and around Darjeeling have been subject to vigorous change but what hasn't changed is the people's attitude. Welcoming outsiders with a smile and open arms as they were 100 years ago. People here are proud to live in such an extraordinary landscape and are willing to share it with you. They always have been and always will be.

Now that you are aware of the historical significance of Darjeeling, why not discover it in the present day and age? We, at Darjeeling trips, provide you with tailor-made plans for Darjeeling and the surrounding areas. A trip to Darjeeling will leave a profound impact on your soul. Contact us for a quote and custom itineraries to quench the wanderlust in you. Till then, the mountains await.

How to get there:

The nearest airport to Darjeeling is Bagdogra which is approximately 95 km away from the city. There are some direct flights from big metropolitan cities like Kolkata, Delhi, and Guwahati to Darjeeling. One can hire a taxi from the airport, or we can arrange for one as soon as you touchdown, for a hassle-free experience.

The nearest railway station to Darjeeling is New Jalpaiguri. One can hire a private taxi or share the local taxi with other passengers, or we can arrange for a vehicle to pick you up for a comfortable ride to the hills. It takes around 3 hours to reach Darjeeling. You could also take the Toy Train to Darjeeling which will take around 6-7 hours.

There are regular buses and taxis via road from Siliguri to Darjeeling. We can arrange for taxis to take you directly to your stay options from the point of boarding.