"Land Of The Thunder Dragon"

Bhutan is a magical and mystical place to visit, where traditional Buddhist culture meets majestic fortress-like Dzongs and monasteries. Bhutan is a one-of-a-kind destination owing to its special monastic architecture and graffiti on the walls depicting paintings of penises as a sign to drive away evil.

Bhutan is still relatively new to tourism and visiting it gives the impression that you're somewhere else altogether. You may find yourself holding your phone in some places in search of a signal, but what's more interesting is that 72% of the land is covered in forests - not only is it carbon-neutral, it is the only country in the world that is carbon-negative.

Known as the Happiest Country in Asia, Bhutan is also popularly referred to as the "Land of the Thunder Dragon." Bhutan is encased in stunning snow Peak Mountains and luscious forests that create a picturesque landscape. Until the 1970s, Bhutan was closed to foreign visitors. Its past and present are deeply rooted in its traditional Buddhist culture.

Thimphu is the capital and cultural center of Bhutan, a tiny Himalayan kingdom. A drive of one hour from Paro takes you to Bhutan's capital, Thimphu. Located in the highest ranges of the Himalayas, this city boasts old-world charm and modernity, offering breathtaking views of the emerald forests and the Raidak or Chuu River. 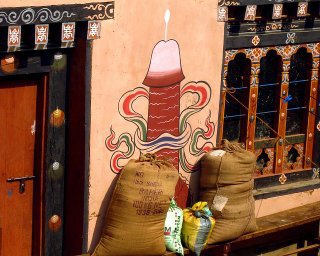 Paro would be your Gateway Arrival Point into the Majestic Kingdom of Bhutan. This city is blessed with a wealth of architecture and natural beauty. A second worthwhile Dzong to see here is Rinpung Dzong. It has the most breathtaking views of the lush Paro Valley. Tourists can also take part in various activities like mountain biking, rafting, and hiking. But the most famous activity of all time here is snowman trekking. It can be challenging for some people but will be one of the most memorable experiences for everyone. It stretches over 5km through high altitude passes. For those tourists who do not wish to participate in these outdoor adventures, there are other options. For instance, you can meditate by the sun's rays from behind the region's dramatic peaks. The highlights of this town would be planning a hike to Tiger’s Nest. Reaching the base point is around 30 min drive.

In a day, it is easy to explore the rest of the town. While in Paro get a beautiful view of the Valley from the Paro Dzong and watch tower (converted into a museum with artifacts and history). Depending on the season, the views changes. It turns golden during the rice harvesting period, you get to pass by the cypress trees and willows while walking around. If the Tiger’s Nest hike is not on your list, you can skip the town and check out the Punakha Dzong, the Metallic Suspension bridge, take some breather at the Dochula Pass enroute, a National Park (bird watching) fall enroute too while within a 2 hr drive from Thimphu.

From this viewpoint, you can view a magnificent view of the gorge and the black mountains of Bhutan. Situated in the center of Bhutan, this spot is surrounded by lush flora, creating an amazing place to surround your senses and simply meditate. It is well known for the town's impressive Dzong. According to the Dzonkha language, the name translates to "new village". The place is also called the most spectacular place in Bhutan. There is a picturesque view of the Mangde River from there. The buildings form a maze of corridors. Each step is paved with country yards and has stone steps. This sleepy little town is the perfect place to pass time between sightseeing and taking a stroll through beautifully decorated shops filled with potted plants and crowded with gleeful locals.

This is the district of Bhutan which is located in its northernmost part. Visitors who visit here will be struck by its beauty and left with an unforgettable memory of the elevations that range from 1,500 to 4,500 meters. Built in 1646, the Dzong defended Bhutan from several invasions in the 17th century and 18th centuries.

Though the area is known for its many other reasons, it is the people who live here who catch the attention of tourists the most. They can be called the reason because of whom the culture of the country is still dominant out here. The main source of income comes from yaks, as they trade cheese, butter, meat, or products made from their hair. Here tracking is also very famous. It is one of the most demanding treks in the Himalayas and its healing hot springs. The newly established Royal Highlander festival is becoming increasingly popular. It is a must-see for passing travelers.

It is also known as the ‘spiritual heartland of Bhutan’. Bumthang boats are some of the oldest Buddhist temples and monasteries. Covered by mountains and valleys on all four sides i.e. Tang, Ura, Chhume, and Chokhor with the latter being the most well-known as it holds some of the significant temples and dzongs.

It is the place where Buddhism was first introduced to Bhutan. It is also the birthplace of Saint Pema Lingpa, to whom the Bhutanese royalty trace their descent. Also, wool products are very popular here.The colorful wool produced here is commonly referred to as yathra in other parts of the world.

And like every other location mentioned here, it also has a breath-taking view of mountains and greenery. Paddling is the most well-known activity that is done by tourists so that they can enjoy the picturesque view and connect with nature more closely. The mixture of meadows forests, villages, and sacred sites provide a picturesque showcase of Bhutan’s rural scenery.

Termed as the most beautiful destination in Bhutan, the Gangtey Valley is also known as Pobjika Valley. It is a glacial valley surrounded by picturesque black mountains.

Because it has the rarest and most endangered black-necked cranes that arrive in the winter from the Tibetan Plateau, it is the most significant conservation zone in the country. Goemba Monastery is also a reason for its status as one of the most tourist-friendly places. It was built back in the early 17th century.

In addition to being the holiest place for Buddhists, it also sits proudly over the rest of the valley. As it was built a long ago, it was renovated in 2008. This has a residential facility for the monks, as well as a meditation center and it also has guest houses. People can come here and experience what true meditation is and by doing this, they can reconnect with their souls and find peace in their The mountainsides can also be explored by walking and trekking. By coming here one can find inner peace that is the most beautiful and rare experience that one can achieve in their lifetime.

Tiger Nest monastery is also known as the Taksang Monastery. It has become the unofficial symbol of Bhutan. It is the most sacred place of pilgrimage in the country. It was built in 1692, around the Taktsang Senge samdup cave where Guru Padmasambhava is said to have meditated for three years, three months, three days, and three hours in the 8th century.

Perched on a sheer ridge at a dazzling height of 3,000m above sea level and appearing to cling to the side of the rugged cliff face, the sight of this unique holy building will leave you breathless in any way possible.

The building is located in a high location on the mountain so one can only reach it by trekking. In an artistic way, its history is carved into the walls. The trekking will take probably three hours to reach the destination but the result is will be worth it. It was unfortunately burned by fire so it was rebuilt in 1998.

It is located in the heart of Bhutan, Wangdue is a delight for all the senses. It encompasses picturesque scenery, majestic architecture, and ancient culture eager to be explored and experienced. Wangdue Dzong was once the most famous landmark of the city, but it was also destroyed by fire in 2012, like Tiger Nest Monastery. The reconstruction is in progress and is expected to take several more years to complete. The Dzong was basically built in this location because, whilst searching for a suitable building site, locals saw four different directions. This supposedly symbolized the spread of Buddhism to the four points of the compass. Here in Wangdue people can also connect with the monks to learn about the country’s tradition and culture more deeply. Here you can also learn about the inner workings of Buddhism.

The scenic heritage-enriched national park is located in the southern-most-centre of Bhutan. It is said to be the country’s crown jewel. It was not opened for the public a few years back, but now locals and tourists can explore this with the permission of the government.

It can be said that it is the oldest protected area and forms a part of the transnational conservational zone. It separates the Jigme Singye Wangchuck National Park in the north from the world heritage-listed Manas Tiger Reserve in India. It is the home for the largest tropical and subtropical ecosystem in Bhutan. It preserves the highly endangered Bengal tigers, Asian elephants, and the one-horn rhino. Many species of birds that can be counted up to 426 and it contains over 900 flora. The parks are most biologically outstanding in the world. Tourism in this park can be done by walking on foot, by car or by boat or even the park’s eco trails, as they try to spot one of its rare inhabitants.

Interested! Contact us to book your adventurous activities right away, and we will take care of the rest for you.

The altitude in the kingdom of Bhutan ranges from 1800 m to 7800 on the Himalayan Plateau and the climate varies accordingly. October to December is the best time in which one can visit Bhutan and experience the most of it as the air is clean and fresh with clear and sunny skies. This time period is perfect for trekking. For those who enjoy winter weather, the best time to travel is between January and February. In April, however, the climate becomes dry and a pleasant spring welcomes the tourists.

Q. Procedure for applying a VISA?
Ans: Bhutan has a visa policy that is unlike any other country around the globe. The Bhutan visa card can only be applied through a licensed Bhutan tour operator that arranges the tour for you.
Indian Citizens, Bangladeshi Citizens, and Maldives Citizens need not get a visa to visit Bhutan. But for the visa-free policy, here are some norms that have to be followed:-

Manish Giri an engineer by profession. He received a master’s degree in Computer Science & Applications and has always been a travel freak who frequently put outs his travel experiences to help fellow travellers.