Stunning, thrilling, and vibrant are the right words to describe North Sikkim, which happens to be the largest of Sikkim's four districts. A region that is one of the least populated in the country, it is nevertheless a place that people want to visit. This is because of its picturesque landscapes, lakes, and mountains that make North Sikkim speak a story of its own.

Amidst picturesque waterfalls, the snow-capped mountain tops look breathtaking, and no one can do anything but simply admire their beauty and calmness.

At North Sikkim Mangan is a place of importance. In addition to being the capital of North Sikkim, Mangan is also known as the Indian Cardamom Capital.

In the morning, at approximately 9:30 am, when the sun rises over Gangtok, our driver will be waiting for you outside your Gangtok accommodation. We will start our journey via NH31A and head to Lachen, which will take 7-8 hours if we make pit stops along the way. In the lap of the Himalayas, it is a very beautiful and picturesque village at the entry point into the north of Sikkim.

While on our journey to Lachen we will be making a halt at a few wonderful locations which are:-

Tashi View Point: It's difficult to imagine anything better than the epic panorama offered by this viewpoint built by Tashi Namgyal that offers an unparalleled view of Khangchendzonga. The experience of getting photographed in traditional Sikkimese clothing, watching the mountains with a telescope, or sipping a cup of warm coffee at Tashi View Point will definitely lighten your spirits.

Kabi Longstok: Greenery and a calm atmosphere complement the ambiance created by kids playing. Tekung Tek and Khey Bum Sar signed a friendship treaty here which is also commemorated by a small Buddhist monastery carved into a stone pillar.

Seven Sister Waterfalls: A spectacular cascade of pristine water cuts a gulf above a cardamom grove & plunges into a rocky pool at the Seven Sisters waterfall. The waterfall is a single stream falling downhill but descends in seven stages, thus it is called the seven sisters waterfall.

Note: Other the above mentioned stoppages we will also be making short halts at Naga Waterfall, Bhima Nala and Twin Waterfall while enrouting this way.

At 4 a.m., after your breakfast at Thangu, we will head straight to Gurudongmar Lake via Kanchenjunga National Park.

Hindus and Buddhists revere Gurudongmar Lake as one of the most sacred lakes in the world. The milky hue of the lake remains throughout the year. Legend has it that the lake's water could not be used for drinking, since it remained frozen most of the year. Local residents approached Guru Padmasambhava while he was returning from Tibet, requesting water for him.

The Guru obliged. In spite of the harshest winters, part of the lake never freezes under his touch. Since the water of the lake is considered sacred, visitors carry the blessed water in bottles.

After the lake excursion en route Chungthang and head towards your next destination Lachung.

The main attraction around Yumthang Valley is the snow-capped mountains in winter and the rhododendron in May (1800ft/1.5Hrs) in May. You can also visit Zero Point (at Extra Cost subject to Permit and Road Condition).

In addition, we will travel to the Shingba Rhododendron Sanctuary, which covers 43 square kilometers and borders Lachung and Yumthang. Known for its abundance of Rhododendron trees and shrubs, the Sanctuary also has a diverse ground flora and other vegetation.

Note: For additional cost and depending on condition of weather and availability, visitors can also tour Katao Valley. Offering panoramic views of the Himalayas, Katao Valley is as beautiful as Yumthang.

You will forever cherish the memories of your beautiful trip to the Himalayan Villages. Our driver will drop you off at Gangtok, where you can spend the night and then head towards the rest of your journey. 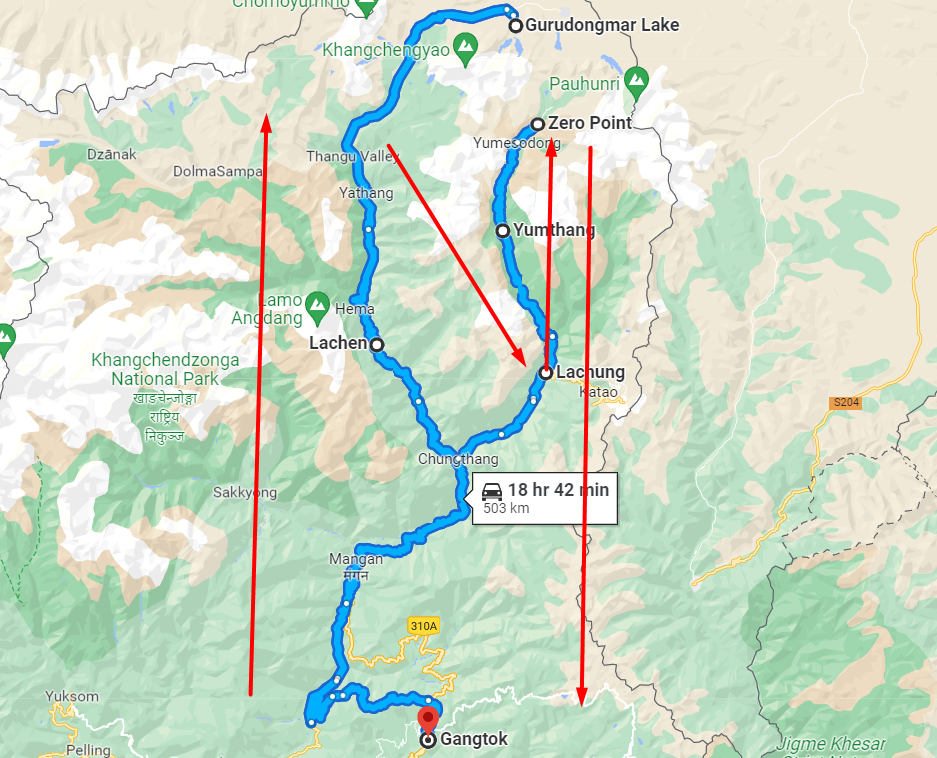 Sikkim's largest district, the landscape is mountainous with dense vegetation up to alpine altitudes before transitioning to desert scrub towards the northern tundra. Numerous waterfalls astride the main road make the trip to this district extremely picturesque.

Due to the steepness of the valleys, the most prominent nature of the area is the prevalence of landslides, which can drop anywhere between 3000 and 5,000 ft (1,500 m) and cause massive destruction. Many of these erosions are the result of erosive action caused by rains or snow melting on the tops of the mountains.

The majority of the residents of the state live around Mangan, the district headquarters, located at about 2,000 ft (610 m) above sea level. The vegetation in the north transitions from temperate to alpine to tundra vegetation as the elevation increases. Extremely high altitudes, at altitudes over 6,000 metres, see temperatures ranging from about 25° to below *40°. Located on the western border with Nepal, Kanchenjanga has an elevation of over 8,000 m and can be seen clearly from the town of Singhik.

Analysis of the trip from the person who have lived that experience.

Note: Navigate using those small dots to see tour itinerary if your on the bottom of this page

Why Book With Us?

Do not hesitage to give us a call. We are an expert team and we are happy to talk to you.